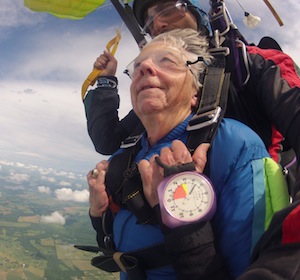 The following was written by Kendal at Home member Nancy S.

Last month, I jumped out of an airplane!

My grandson, Tyler, was about to celebrate his 21st birthday by parachuting from an airplane. He knew that 60 years ago I had been in the Civil Air Patrol in high school -- and I loved it, even though I had never jumped. So he asked if I might like to join him.

Since I was already planning to go to their home near Cincinnati for Ty's birthday celebration, I knew I would be with them when he jumped. After thinking about it, I decided to do a tandem jump, where I would be strapped to an instructor.

I was worried about the landing because I really did not want to break a leg. I have too much grass around my home. Besides, the class before Ty's jump lasted four hours, but the class for the tandem jump was only half-an-hour.

I could not have done what Ty did, called a static line jump. He had to hang from the wing support after he was out of the plan, then when he let go the static line pulled his chute open for him.

My tandem jump instructor with the Warren County Sky Diving Company was E.J. Otuos, from Hungary. After we were in the plane and beginning to climb, we were strapped together in a harness. He was wearing the parachute.

Because of the extra weight of two persons, we jumped from 12,000 feet. I was supposed to pull the rip cord at 5,500 feet, but I goofed and forgot to look for the rip cord. I just reached for it, so E.J. pulled it. Actually, the ride down with the chute open was more exhilarating than the free fall. And even though I left my hearing aid with my daughter, I could hear E.J. speak.

I was not scared. I knew I would be fine. Both E.J. and I made perfect two-footed landings on a big grassy field near the hanger. As we were falling, E.J.'s hand camera took pictures every 10 seconds. As a souvenir, E.J. gave me a CD of all the photos, plus a certificate certifying my jump.

I think the people on the ground watching us were more excited then I was. A lot of them had done jumps so they were reliving their first jump with me. All in all, it was an interesting way to celebrate a special birthday.