The Goldmans’ Second Acts are as Exhilarating as their First 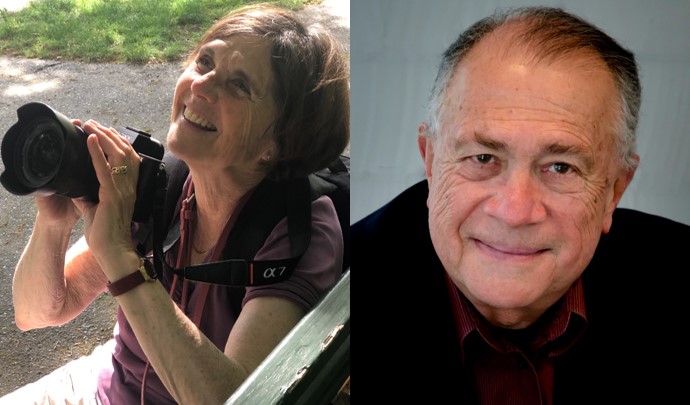 Kendal at Home welcomes two of our newest members in the Boston area, Vivien and Ronald Goldman. Retirement is an oxymoron for Vivien and Ronald, whose post-career lives are as full as their view of the Atlantic Ocean. Living on an isthmus in Massachusetts, they have the rare opportunity to witness the sun rise from the ocean in the morning and sink back into it at dusk.

Vivien, after a career in library science and international development, has dedicated her time to photographing sweeping seaside landscapes, drawing on Ansel Adams and his f64 school for inspiration. “I want to show people what I see and feel,” she says. “I try to avoid taking ‘postcard’ pictures and capture the detail of natural things. Although she’s transitioned from the darkroom to digital photography, she swims against the current and refuses to shoot with a smartphone.”

Ron, after a career in academia, psychotherapy, and couples therapy, has indulged his passion for Shakespeare, recently landing the role of Menenius Agrippa in the tragedy “Coriolanus” for Actors' Shakespeare Project. It’s one of the hardest things he’s ever done – and loved. He’s also written and performed two one-person shows, both with themes of the Holocaust, a horror that caused both Vivien’s and Ron’s parents to flee Nazi Germany. Vivien’s family ended up in India and Ron’s in South Africa.

By the time they were adults, Vivien and Ron had both emigrated to the United States. They married and had two children. Now in their early 70s, the Goldmans are vibrant, healthy, and due for many more sunrises, sunsets, and adventures. But they are also wary of the uncertainties of aging, so they were among the first Massachusetts residents to become Kendal at Home members.

Why join Kendal at Home? The short answer is that neither wants to be burden. Ever.

Vivien knows all about burdens. She cared for her mother and aunt deep into their 80s. It worked for a time, until she was forced to painfully relocate them like potted plants to elderly housing, assisted living, and eventually a nursing home, where the care was often lacking. She carried out her duty, but it was overwhelming, and she feels guilt for not having been able to do better for them. If only she’d had some support, as Kendal at Home provides in financial and wellness planning. For Vivien, Kendal at Home is “something to have in our back pocket if we ever should need somebody.”

Ron knows something about burdens, too. He recalls seeing a dear friend suffer a fatal disease, an event that in the last weeks transformed a loving marriage into an awful nurse-patient relationship. Ron wants a guarantee that neither his children nor his wife will experience anything of the kind. He and Vivien also like the assurance that long-term health issues won’t negate the good fortune they’ve enjoyed.

“Kendal at home gives us a sense of relief, protection against being drained if the worst set of things happen in a long-term illness of some kind,” says Ron. “We also feel protected against being a burden to our kids, and from Vivien ever finding herself in a caretaker relationship to me. Kendal makes it possible to prevent that, so it’s an ongoing sense of relief.”

“Right now,” says Vivien, “we don’t need Kendal. But it's later on in life when you might. When you don't know where to turn.

Subscribe to our Kendal at Home blog and have articles sent directly to
your inbox.

Lessons for all of us, from the summit of Everest

Documenting the Path to Equality: An Introduction to The History Project

Retirement: The Beginning of Act II