Kendal at Home After 10 Years: A Chat with Lynne Giacobbe 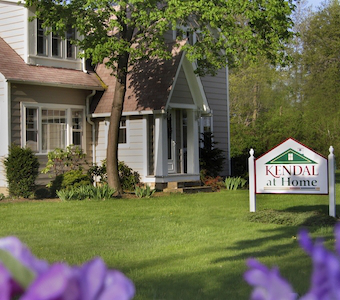 Just over a decade ago, older adults in the greater Cleveland area who wanted to remain independent in their homes did so with little or no assistance. Today, they have a trusted partner in Kendal at Home, a comprehensive program that combines the security of a continuing care retirement community with the freedom and independence of living in your home.

On April 15, 2004, Kendal at Home presented its first seminar; making last month the not-for-profit’s 10 Year Anniversary. Attracted by the opportunity to help develop a new and innovative program that would fulfill an unserved need, Executive Director Lynne Giacobbe has been at Kendal at Home since the beginning.

Here, she shares what it is that makes Kendal at Home so unique and in-demand, how it’s expected to grow in the coming years, and how it’s marking this significant milestone.

A Not-for-Profit with Values, a Committed Staff, & a Visionary Board

An affiliate of the Kendal Corporation, Kendal at Home is founded on Quaker principles and values and welcomes individuals of any religion, race, color, sexual orientation, and socio-economic background. “I wanted to work for an organization with a good reputation that had values and philosophies that aligned with mine,” Giacobbe says. “Everything I researched indicated Kendal had strong values and an excellent reputation.”

Soon after coming on board, Giacobbe hired Director of Care Coordination Dave Zientarski and Care Coordinator Katie Tipton, both of whom are still on staff. In fact, the devotion of the staff is one of the many reasons members are attracted to the organization.

“We all feel a strong commitment to the mission of the work we’re doing. When people decide to join Kendal at Home, they don’t enter into that decision lightly. They entrust their care for the remainder of their life to us, “ Giacobbe says. “We all have that sense of obligation and commitment to what we’re doing. We’ve made a promise that we will be there.”

Both Kendal at Home’s Board of Directors and its members are assets that set it apart. Giacobbe credits the two groups for working together to strategically plan and implement forward-thinking initiatives that have helped make the organization sustainable.

“Two years ago, our Board took part in a strategic planning process, identifying expansion, philanthropy, and technology as areas for growth. Over this past year, all of those things have come to fruition,” she says. “Kendal at Home members have been supportive and engaged in this process as we’ve continued to work and communicate with them about these initiatives. They’ve been at the forefront in helping move things forward.”

Growing Throughout Greater Cleveland and Beyond

A decade ago, Kendal at Home was available to older adults exclusively in Lorain and Cuyahoga counties. Today, it serves more than 200 older adults in 10 northeast Ohio counties. “Over these last few years, [our growth] has really accelerated. I think as people age, they begin to realize they want to remain in their own homes. They value the ability to do that with a partner like Kendal at Home,” Giacobbe says.

As its membership grows, so does Kendal at Home’s staff. “As we bring in more members, we’ll need more care coordinators to keep our intimate dynamic in place,” Giacobbe says. “Members value the fact that they’ve had the same care coordinators since they started. We’ll add additional care coordinators as the program grows. That will allow us to continue to serve people in the way we’ve committed.”

And according to Giacobbe, it may not be long until older adults outside of the northeast Ohio area will be able to enjoy the benefits of membership, as well. “I believe Kendal at Home will have a much broader presence in the Kendal system, that we won’t see Kendal at Home in just the Cleveland area, but in every area that Kendal exists and maybe in some areas where there is no Kendal,” she says. “In the very near future, that could be a realistic possibility.”

Celebrate 10 Years with Kendal at Home

In the here and now, Kendal at Home is marking its 10-Year Anniversary with a celebratory luncheon on Wednesday, May 21 with staff, members, partners, and other distinguished guests, including Kendal Corporation President & CEO John A. Diffey. Giacobbe estimates roughly 200 people in all will be in attendance.

At the luncheon, Kendal at Home will pay special recognition to its charter members—those individuals who believed in Kendal at Home’s mission and people before it was the organization it is today.

“I still remember our first two members sitting down at the table with us and asking, ‘How many members do you have?’ and thinking, ‘Well, hopefully at the end of the day, we’ll have two.’ They still signed. We had no guarantee that this would work. They challenged us every day over those years to do what we said we would do,” Giacobbe says.

“I remember their conversations with us about how they wanted to live their lives and how they wanted to die. To see both of them be able to do those things in the way they had said, I think they would say that we honored our commitment.”