Leonard Bernstein: The Man Who Shaped Music in America 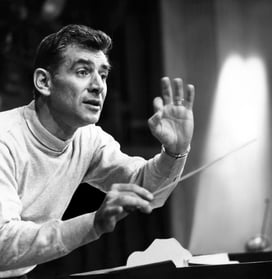 The Man Who Shaped Music in America. Lenny, as he was affectionately known, came to embody the very idea of music itself for most Americans in the middle of the twentieth century. Composer, pianist, conductor, intellectual, educator, Bernstein was the true renaissance man. His knowledge was immense, his enthusiasm unbounded, his charisma off the charts, and his fame colossal. So why was he so tortured?

Come and explore the man behind the music, and the music that made the man. Russell Ger is sure to ignite a fire of curiosity and redouble your appreciation for one of the most intriguing characters ever to grace American artistic life.

Russel Ger is an Australian conductor based in New York. His broad repertoire spans orchestral, operatic, and choral music, which he has conducted across Europe, North America, and his home country of Australia. Since 2016, Mr. Ger has been Music Director of the Greater Newburgh Symphony Orchestra in the Hudson Valley where he conducts six subscription concerts each season in addition to Family and Pops concerts. He has successfully elevated the artistry and dramatically increased community engagement, resulting in consistent near-capacity audiences. Mr. Ger was recently the winner of the Orchestra Prize and overall Third Place in the Makris International Conducting Competition in Belgrade, Serbia. He is also the 2014 winner of the prestigious Brian Stacey Memorial Trust Award for Emerging Australian Conductors.

Between 2012-14, Mr. Ger toured North America with renowned violinist Itzhak Perlman, promoting a recording of Jewish art-music made for Sony Records. Performances took place at the Hollywood Bowl with members of the Los Angeles Philharmonic before an audience of 10,000, and at the Barclays Center arena in New York for an audience of 6,000. The tour also drew capacity houses at the Boca Raton Arts Festival, Boston Celebrity Series at Symphony Hall, Ravinia Festival in Chicago, Long Island, and Toronto. A PBS Special aired in 2014. For his post-graduate study, Mr. Ger received a scholarship to pursue a Masters of Music in Orchestral Conducting at The Boston Conservatory. He graduated top of his class in 2010. And in 2013, Mr. Ger was one of four Finalists from around the world for the prestigious 2nd International Chicago Symphony Orchestra Sir Georg Solti Conducting Apprenticeship.