Do You Need a Measles Booster Shot? 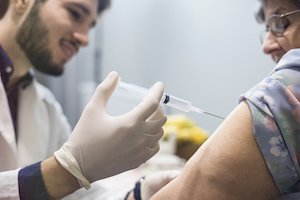 Measles outbreaks are in the news, with more than 700 cases in the United States alone during the first four months of 2019, according to the Centers for Disease Control and Prevention (CDC). This is the largest number since the disease was considered to be eliminated in the United States in 2000. The largest number of cases in our country in 2019 have been in New York and Washington, but cases have already been documented in more than a third of the states so far.

Most people contracting the illness were never vaccinated, but these outbreaks are nevertheless causing public health officials to rethink the value of a measles booster for older adults. NPR.org and Immunize.org each provide an overview of these recommendations being made. Here are highlights.

First, if you were born before 1957, you have already “lived through several years of epidemic measles before the first measles vaccine was licensed in 1963.” Surveys indicate that 95 percent to 98 percent of people in this population have immunity to measles and, in general, people born before 1957 are “presumed to be immune.” Although if blood tests indicate this is not the case, then it’s recommended you be vaccinated, with a second dose 28 days later.

If you were born after 1957 but were vaccinated before 1968 with an inactivated virus, then you should have at least one dose of a live attenuated measles vaccination. Fortunately, if you received two doses of the MMR vaccine after 1967, you should be protected.

You may not know if you were vaccinated with the ineffective version or with the recommended MMR (measles, mumps and rubella) version because of how long ago it happened. If that’s the case, it’s usually safe to get your MMR shot now, but check with your doctor first. Reasons to get a booster include that, as an adult, you’re more prone to developing complications with the measles, which can include pneumonia and swelling of the brain.

If you live in an area where there are measles outbreaks or plan to travel to countries where outbreaks are occurring (Brazil, Israel, Japan, the Philippines, and certain countries in Europe and Africa), then it’s important that you talk to your doctor and follow through on any recommendations made.

Two doses of MMR are given because somewhere between 2 percent to 5 percent of people who are vaccinated against measles don’t develop immunity, so the second dose is a precautionary measure.

You can also find more information about the MMR vaccination from the CDC. If you have any of these conditions, be sure to discuss them with your doctor before taking any actions:

Now, What About the Mumps?

An expert quoted at NextAvenue.org shares that immunity to the mumps vaccination can also wane in effectiveness. So, it makes sense to talk to your doctor about a booster if you’re concerned or feel you have high exposure risk. The same article notes that, to date, no evidence exists that rubella immunity wanes.