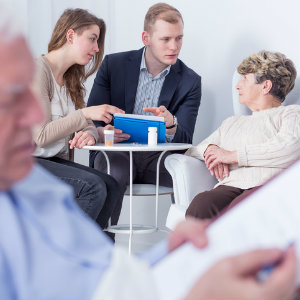 As people age, it’s only natural that a percentage of them will need end of life care in any given year, but a study shows that it isn’t the oldest Americans who have the largest medical bills for this type of care. More specifically, Americans who are in their 80s and 90s aren’t accruing the largest medical bills to hold off death. It’s the younger seniors who have “potentially longer expectancies” who have the largest bills, according to a study that analyzes Medicare data.

The Kaiser Family Foundation reviewed 2014 Medicare data for people who were covered by their insurance and died that year; eight out of 10 people in the United States who died in 2014 were covered by Medicare, making it the largest insurer of end-of-life care.

The Kaiser Family Foundation study shows that the average per-beneficiary spending actually peaked at age 73 at $43,353. Once a person reached age 85, the average per-beneficiary spending was $33,381; for a 90-year-old, an average of $27,779 per beneficiary. The program’s associate director, Juliette Cubanski, admits this is a surprising pattern, saying this study is suggesting that “providers, patients and their families may favor more costly, lifesaving care for younger seniors, and turn to hospice care when patients are older.”

This information disproves a common belief, she adds, that doctors are “throwing everything including the kitchen sink at people at the end of life regardless of how old they are.”

The average amount spent, overall, was $34,529 per person in this population in 2014, broken down this way:

Here’s another interesting statistic. Spending on patients who die each year is a declining share of overall Medicare spending; contrasting figures are as follows:

“Overall,” the article says, “the aging baby boomer population is leading to a decrease in the growth of spending on patients' last years of life. More beneficiaries are younger and healthier, and they are living longer, so their last years of life are cheaper.”

Returning to a point made at the beginning of this article, Americans are living longer than ever before. According to data compiled by the Social Security Administration:

Approximately 25% of people who are currently 65 will live past 90, while about 10 percent will live past the age of 95. Factor this in: People aged 65 and older numbered nearly 45 million in 2013, accounting for 14.1 percent of the total population. Millions of Americans still have decades of living ahead of them. Learn more about your options for aging at home.