The Keto Diet and Alzheimer’s Disease: Is it Beneficial? 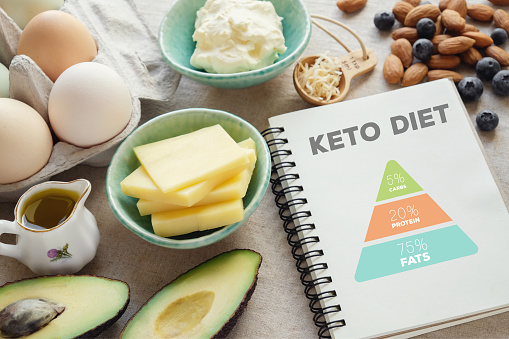 What you eat can have a beneficial or a detrimental effect on your brain health. You may have heard that Mediterrean diet or low-carb diets can improve brain health and diets heavy in high glycemic foods can negatively impact brain health.

Because of this, researchers are considering diet’s role in reducing the risk and treatment of Alzheimer’s disease.

The Keto Diet and Alzheimer’s: How it Works

Alzheimer’s patient brains have shown a decreased ability to metabolize glucose, which can precede or coincide with the onset of cognitive decline. Thankfully, researchers found that, except in advanced cases of Alzheimer’s, the brain can use ketones for fuel instead of glucose.

Your body produces ketones by going into ketosis, which happens when you burn fat instead of carbohydrates for energy. Ketosis occurs if you fast, have uncontrolled diabetes, or if you follow eating plans like the ketogenic diet. The ketogenic diet, or keto diet, was originally developed as a way to treat epileptic seizures but has since become a popular way to lose weight. It focuses on eating healthy fats over carbohydrates. In fact, according to Harvard Health, on a keto diet, up to 90 percent of your caloric intake is healthy fats.

Participants with mild to moderate Alzheimer’s disease took part in a four-month clinical trial to see if eating a keto diet would have any positive effects on their brain health. They ate a diet consisting of 10 percent carbohydrates, 20 percent protein and 70 percent fat and were also given daily medium-chain triglycerides (MCT) oil supplements. MCT oil is most commonly found in coconuts, and it is easier to digest than other forms of fat.

Researchers found cognitive test results significantly improved in nine out of 10 participants. What’s more, the participants’ cognitive test scores returned to what they were when they resumed their normal diets after the study. The authors caution that although the results are significant, it is not certain whether the keto diet and supplements were responsible for the changes.

In another clinical trial, participants with mild cognitive impairment were given either a drink containing emulsified MCTs or a placebo. Those who received the MCT drink showed enhanced short-term cognitive performance.

The Keto Diet and Alzheimers: The Good and Bad

While the keto diet and the use of MCT supplements might seem promising for improving brain health and maybe even preventing Alzheimer’s, it comes with risks. As Harvard Health points out, the keto diet can increase your cholesterol, which raises your risk for heart disease. It can also put you at risk for nutrient deficiencies if you’re not consuming enough fruits and vegetables.

The keto diet can also cause these issues:

Whether you’re interested in the keto diet for its possible benefits to brain health or you’d like to lose weight, be sure to consult with your doctor or a registered dietitian first.