Want to Talk Politics with a Loved One? Here's How to Do It 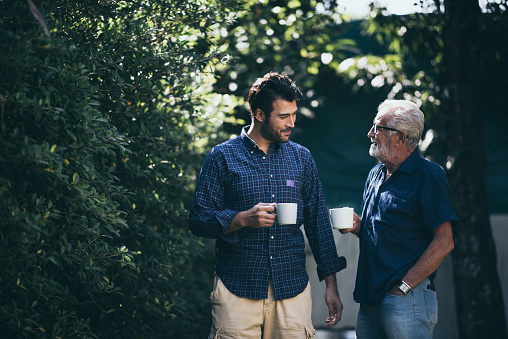 Yes, the election is finally over — and yet, challenging political conversations will likely continue to arise with friends and family members, perhaps over the upcoming holiday season. When people around dinner tables have different political views, these can be difficult conversations, indeed, even rising to the level of political arguments that can spoil the time spent together.

One option, of course, is to avoid these tough conversations altogether when you know that people around dinner tables will have different political beliefs. Though that can be easier said than done. As NextAvenue.org points out, people may want to convince those with opposing views that they’re wrong — to get them to change their ways of thinking. So, even when people agree ahead of time to avoid highly charged topics, they may not follow through.

As a psychotherapist points out, some older people believe they only have a short amount of time left to share their points of view—and, in response, they may bring up controversial topics. Then, everyone involved may go away feeling frustrated. After all, people seldom change their minds because of what is discussed during a political conversation. In fact, these conversations can range from awkward to combative.

So, is it possible to have a productive conversation with friends and family members who have differing political views? Yes, experts say, given that all parties are willing to listen with an open mind. It’s important to pick a time and place where difficult topics can be discussed, preferably one where alcohol isn’t being consumed, in a setting where someone with a different point of view won’t be ganged up on by people holding the majority opinion.

An open-minded starter question could be posed, perhaps: “I’d like to hear more about why you feel the way you do. How did you arrive at this opinion?” Then actively listen without interrupting. During this discussion, focus on facts, not feelings, and look for areas where you agree. That way, you can have conversations with common ground.

VeryWellFamily.com offers more tips, including to use humor wisely. If you choose to try this, avoid partisan humor because that can quickly transform a relatively open conversation into a political argument. Stay calm. Keep your tone civil and your voice at a normal level. Pay attention to and manage your body language. Don’t lean toward the other person as that can make them feel trapped. Avoid body language that can be perceived as hostile.

As soon as you realize you can’t do this, find a reasonable way to end the political conversation, at least for the time being. It may feel reasonable to end it by saying, “Well, let’s just agree to disagree” but this may cause the other person to feel cut off. Instead, you can try something like, “Thank you for giving me another point of view to consider. Let’s change the topic now and pick another time to continue our political discussion.

Finally, here’s more advice on how to have a productive conversation around dinner tables, this time according to an article by The Atlantic: to “abandon the idea of winning an argument or convincing other people of the wrongness of their positions, and to instead aim to have a conversation in which each party understands more fully why the other holds a given belief. Each participant . . . should approach the conversation with curiosity, a willingness to leave room for nuance, and grace, in the ‘goodwill’ sense of the word.”